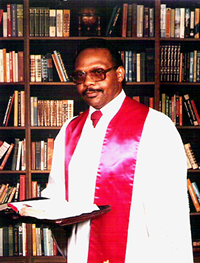 Bishop James Edward Parris, Sr., the seventh of nine children, was born January 24, 1934 to the late Rev. Alvin Parris Sr. and Janie Elizabeth Thorpe-Parris in Jacksonville, Florida. He brought so much joy to the family of older siblings since he was such a happy boy. Also, in those days, the seventh child was purportedly to one of exceptional wisdom; thus his maturation was observed with particular care. He was reared in a devout Christian home where Christ was the head of the house, the unseen guest at every meal, the silent listener to every conversation.

His sisters fondly speak of Bishop Parris's first word. As they recall, it was "Booties" which he would call for as his favorite part of getting dressed. Thus, the nickname "Boots" stuck with him throughout the years. This did not change. Until death, he wore high quality, good looking shoes.

Bishop Parris was educated in the public schools of Duval County, Florida. One of the main things he liked about school was getting to walk home with Isabelle and tote her books. They were united in Holy Matrimony May 4th, 1952. As a teenager, he acknowledged a personal relationship with God and His Son, Jesus Christ. He received was Baptism and was fellowshipped into the Church of God Auditorium under the Pastorate of the late Bishop Peter C. Hickson.

He was a hard worker as a building maintenance supervisor at the Florida Title office building in downtown Jacksonville, working there for twenty years. He later moved on to the Sears Department Store, where he was promoted to Head Supervisor and was in charge of the Merchandise and Stock Division. He retired from Sears after seventeen years of service in 1982.

Bishop Parris answered the Call of God to preach the Gospel, became a soul winner and shepherd of His Flock. He was licensed by the Church of God, Cleveland, Tennessee, to be an Exhorter and a licensed Minister. Bishop and his wife attended and graduated from Church of God Ministerial Internship Program and were later appointed Pastors of the Eastside Church of God in June 1982.

He later founded and pastured Faith Deliverance Church of God, Inc.—now known as Faith Deliverance Worship Center. As pastor and Bishop he organized and trained numerous church leaders, appointed and ordained deacons, deaconess, missionaries and ministers. His life established the foundation for the ministry and his faith in God was the basis of the ministry's faith. He yielded this position to his son, Rev. James E. Parris, Jr. gradually over a four-year period when his health failed and officially appointed his son Pastor in 1998. At the time of his death, he was Pastor Emeritus and Bishop of the Work.

He was a devoted husband, loving father and a good friend, brother, uncle, cousin; he was stable in every position. 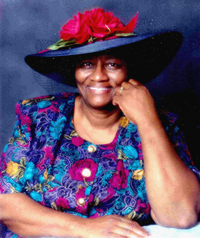 In the year 1952, May 4th, Isabelle Delores Holmes was united in Holy matrimony to James Edward Parris. Through this union they welcomed the birth of their firstborn a daughter, Edwarlena Isabelle on August 18, 1956 and two years later a son, James Edward, Jr. on August 30, 1958.

This union was blessed and cherished for 48 years.

Isabelle was saved at an early age of 9 at Abyssinia Baptist Church; and later transferred her membership to Friendly Baptist Church at the age of 12. At 16 she received the baptism of the Holy Ghost; and became a member of Church of God Auditorium. As the years passed she became a member of the Gospel Chorus and a Sunday School assistant teacher.

Isabelle attended local schools; College Park, Davis Street & Stanton High. She was employed at St. Vincent's Hospital, Edwards College as dish-washer and later assistant cook and assistant manager in the 1950s and 1960s. she was manager of dinning hall at convention center of Church of God Auditorium and at Food Host caterer. At F.W. Woolworth she was a flower designer and sales person.

A laborer in the vineyard as early as the 1970s in ministry, organizing first Valentine contest and banquet; and Youth Outreach Ministry. The annual Valentine Banquet tradition continued for over 25 years. She named the youth group (Created Witnesses for Christ) along with a Skit entitled "Don't let it be said; "One Day too Late"; performing at various churches throughout the city and on television. The group was also contest participants in the state of Maine. In addition, she sponsored the church's Youth Bible Quiz.

In 1976, she opened the Parris Garden Boutique, located at the corner of Fairfax and 19th Streets. She made all types of large and small floral arrangements (live and silk flowers), organized and arranged weddings, made ceramics and taught ceramics classes. The building was constructed in 1948 by her mother Lee Ella Holmes and was the first store located in the neighborhood. Isabelle operated this business for many years as a licensed florist and licensed ceramics instructor. She later opened the Faith Deliverance C.O.G. Tempette Pavilion Daycare in 1990. She was the daycare director until 2003.

From 1981 to 1982, she participated in the Internship Ministerial Program. From 1982 to 1984 Isabelle Co-Pastor Eastside Church of God (First Lady) with her husband under the governing leadership of the Church of God. There she was a choir member, organized the youth choir, worked 8 weeks as Director of Vacation Bible School, and worked with the Ladies Auxiliary. At Faith Deliverance Church of God, she was president of Ladies Ministry; Outreach Ministry; organized Tempette Belle; and the JEPS Youth choir. She also was a instructor of the first Leadership Intern program for deacon, deaconess and ministers from 1984 - 1988. Isabelle also ran a 3 night Revival in which many souls were saved.

She organized and trained new members class; taught the new members Sunday School class called "Operation Discipleship"; was director of Christian Education department; and held a weekly radio broadcast ministry on WCGL/1360. She organized the initial "Tomb Thumb Weddings" at the daycare from 1993 thru 1999. She remained dutiful in the 2000s; Isabelle taught Mother Davis's Sunday School class in her absence due to illness. She was manager and cook in the Memorial Care Center, that was named after her husband, from 2003 thru 2007.

Isabelle was a friend to all and gave herself fully to whatever task was before her. She was an exceptional florist, outstanding seamstress and tailor, creative custom hat designer, master wedding planner, gifted event planner and meticulous church organizer. Isabelle was also the gifted teacher. She loved to train church leaders to meet the demands of ministry today and develop young Christian leaders for the church of tomorrow. She was forever teaching and training no matter where she was or what she was doing. Isabelle's motto was "I rather wear out, than rust out." Her work was finished. God honored her prayer and took her quickly when her work was done. Her mantle has fallen, it is up to us to pick it up.