1984, after speaking with the state overseer for the Church of God, Reverend James Parris, Sr., and his wife, opened a church mission ministry on the Westside of Jacksonville, on 17th Street. On the first Sunday in July, A.D. 1984, Westside Mission Church of God held it’s first service. In that initial service Bishop James E. Parris, Sr., founding pastor, established church leaders, ministry departments, it’s ministry’s scope, goals and objectives. He declared that the reason this church needed to be established was because “The people had a mind to work.” (Nehemiah 4:6)

Church services began in a converted residence that the congregation affectionately called “The Annex.” Shortly after the church was established, Bishop Parris began to seek the Lord’s face for guidance and he was moved by an unction of the Holy Ghost to officially change the church name to Faith Deliverance Church of God, Inc. (F.D.C.O.G.) and chartered the church through the state of Florida, as an independent work. The church family readily agreed to follow the voice of God. One reason he feels God moved upon him to change the church name is to due to how he was miraculously delivered, in 1982 by his faith, after eight weeks of being hospitalized in the Baptist Hospital of Jacksonville, Florida. During the time of his illness was pastoring the Eastside Church of God. The doctors and orthopedic specialist had given up hope that the gangrene in his foot and ankle would ever heal. But Bishop’s faith in God gave him strength to wait on God in spite of being told of the possibilities of further infection and death. 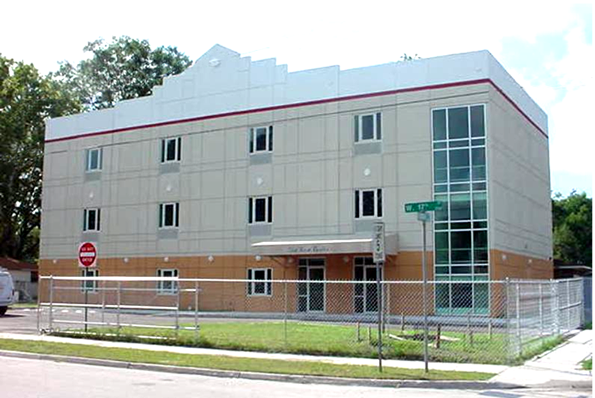 Abraham was a man of faith that pleased God with his faithfulness. Bishop believed, in 1982, that God is able to perform that which He promised. As Abraham staggered not at the promises of God, he was also strong in faith giving glory to God; and being fully persuaded that what God promises, He will perform it. Bishop was delivered by his faith. Henceforth, the name "Faith Deliverance" was born.

In June of 1985 he was ordained Bishop and Founder of Faith Deliverance. The ordination service was held at Faith United Holiness Church Jacksonville, Florida and was ordained Bishop by the late Bishop Elijah M. Parris, of Deerfield Beach, Florida. In 1985, Bishop’s son, Rev. James E. Parris, Jr., began designing the new sanctuary. To reduce costs, the new structure was constructed on the same property as the annex or existing church. After having received zoning approval and favor from the city council, father and son constructed the new structure, by the grace of God, together.

September of 1986, the message was preached in the new sanctuary. In January of 1989 F.D.C.O.G. purchased the property on the corner of 17th and Fairfax streets and established the Tempette Daycare Pavilion child care ministry. In March 1989 Sister Angela Parris, established the Children of Light dance ministry.

In 1992, church mother Lee E. Holmes and the Parris family gave the church family the florist business formally known as Parris Garden Boutique. In the year of 1996 Evangelist Edwarlena Heath was ordained director of the dance ministry. The Kingdom School of Dance was established in 1997. Several dance performances were held that year- Jacksonville Landing, William M. Raines High School and more. Our Faith Walk community newsletter was also established in 1998. In January 1998 F.D.C.O.G. established the Senior Care Pavilion ministry for the elderly in a large two story residence located on 19th street. The church elderly care ministry quickly out grew the home. In May 1998 the church purchased several other properties located on 17th Street to began the expansion of the vision that God gave the ministry.

As of September 26, 1998, Bishop James E. Parris, Sr. passed the mantle to his son Rev. James E. Parris, Jr. to complete the work that God started with him. Rev. James E Parris, Jr. established the Faith Walk radio ministry in March of 1999. In 1999, the Kingdom School of Dance held their first dance performance at the Times Union Center for the Performing Arts. Each annual performance has been held at the same location. Bishop James Parris, Sr. passed away in 2000. The church name was changed to Faith Deliverance Worship Center the same year, to reflect the power of the God that continuously appears in our worship services.

In honor of the late bishop’s continued victory over his health problems Rev. James E. Parris, Jr. and the church began master planning a elderly care center that would provide health care for the elderly and needy, also in 2000. Without government financial assistance, the church constructed the elderly center and dedicated it on July 11, 2004. Rev. Parris was the architect. Minister Derick Powe was superintendent of construction. The original church Annex building was demolished to provide additional parking. The scriptural theme for the facility is James 1:27- "Pure religion that is undefiled before God is to take care of the widowed (elderly) and children in their time of affliction (need)." The two million dollar, three story facility contained a daycare, beds for the mentally disturbed and elderly, large commercial kitchen, two dining rooms and administrative offices. The facility received several commendations from city agencies. A substance abuse ministry was officially established in 2006. Expansion of the existing church facility and a family life center are currently being planned for future construction. The future facility will be called the Alvin Parris, Sr. Memorial Family Life Center. Rev. Alvin Parris is Bishop James Parris, Sr., father.

It has been proven over the years that Faith Deliverance Worship Center was founded solely on the word of God and by the will of God. Many souls have been saved and lives changed through the ministry. Citizens of all races have been ministered to either through the church, Care Center or addiction counseling programs. Deacons, deaconesses, ministers, and missionaries have been trained and/ or ordained.

Whereas this is a sincere ministry; and whereas the people had a mind to work; whereas there is a spirit of dedication and a spirit of hunger to serve God; this truth gave the membership courage, vision, and a spirit of evangelism to help the needy and win the lost of Jacksonville and it’s surrounding communities.