Born and raised on the northside of Jacksonville, Bishop James E. Parris, Jr. Parris started serving God at a young age. His family had been a member of the Church of God, located at the corner of Steel and Blue Streets, for generations. He was saved at the age of 10 and received the Holy Ghost at age 15. He was a member of his mother's youth group called "Created Witnesses for Christ." He joined the Church of God church choir called the Voices of Faith in 1973 and served faithfully until 1976. He graduated from William M. Raines High School in 1976.

In 1976 James Parris, Jr., as a freshman, re-organized and reinstituted University of Florida Black Gospel Choir. Served as the choir President in 1976, and served as the choir's Vice Present until graduation in 1981. In 1977, while yet a freshman God called him the ministry one night in his dorm room in Graham Hall. It was a profound experience that he will never forget. The same year the state overseer, Bishop Menendez, appointed him to the position of Assistant Pastor at the Gainesville Church of God. In 1979 he received his Exhorters License from the Church of God. From 1980-1983 he studied various religious courses in the University's Theology Department.

In 1981, James E. Parris, Jr., graduated with honors from the University of Florida with a Bachelors Degree in Architectural Design. In 1983, he graduated with two Masters Degrees at the same time— Masters of Arts in Architecture and a Masters of Urban and Regional Planning. The University recognized him as the first student in the College of Architecture history to obtain two degrees within he college at the same time- astonishingly in only a two year period. 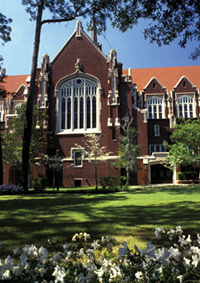 After returning home James Parris, Jr. attended the Eastside Church of God where his father was the pastor. In 1983 he was appointed to the finance committee and served there until his family left the church in 1984. In 1984 his father appointed him Assistant Pastor of the Faith Deliverance Church of God, Inc. At his father's new church he served as the Finance Committee Chairman, Executive Director of the Kingdom School of Dance, member of the Pastor's Council, Sunday School teacher for the adult class, weekly bible study teacher, choir director, member of the Men's Fellowship and musician. He found a wonderful girl and married Angela Smith in 1985. When his father's health began to fail in 1992, he started assuming more and more pastoral duties, such as pastoral counseling, preaching every Sunday, and performing weddings and funerals. In September 1998, he was officially appointed pastor of the church by his father, who also passed his Bishop's title and mantle to his son. The ceremony was called "The Passing of the Mantle." It was his father's wish that upon his death his son's title would be changed from pastor to bishop.

From 2001 until present Bishop Parris has written books on church leadership and has taught leadership seminars at various churches around the state of Florida. As a member of the International Congress of Local Churches (ICLC) he has traveled the country teaching pastors and church leaders how to plan, design, construct and finance their church projects. His favorite scripture in the bible is Psalms 91. The scripture that he has based his professional career on is Ephesians 3:20.

Currently Bishop Parris is the founder and executive director of the Tempette Learning Academy. He is an adjunct professor, pastoral advisor and serves on local community agency boards. He has designed and/or constructed several local churches, schools and community projects.